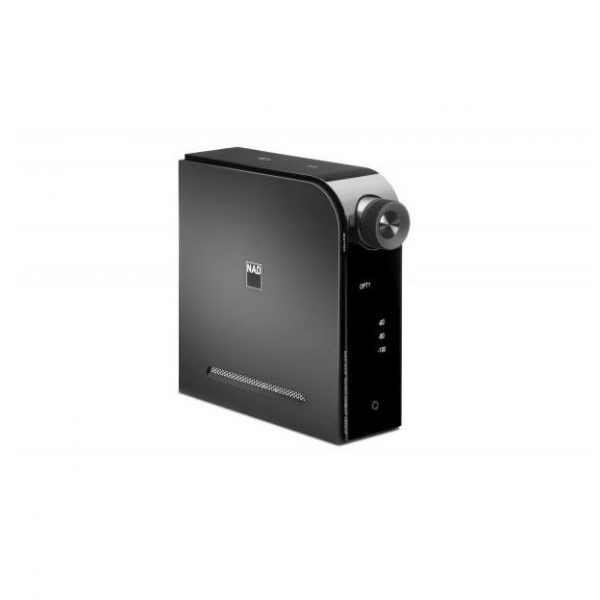 NAD D 3020 is a compact, multiple awards winner amplifier with 2 x 30W power and aptX Bluetooth. It is the successor of the legendary 3020 amplifier.

The original NAD 3020 introduced a generation of Music Lovers to true high fidelity sound. The term High Fidelity literally means “true to the original”. In the ‘70’s over a million people rediscovered their music when they placed a NAD 3020 between their turntable and their loudspeakers. This little gem could embarrass amplifiers costing 10 times more with its big, warm and detailed sound. Once people realized what they had been missing it lead them to a lifetime of enhanced musical enjoyment.

NAD rewrote the rules for amplifiers by designing the 3020 for the real world; instead of allowing laboratory test equipment to have the last word, we made sure that we could properly drive real loudspeakers with real music. The result of this real world approach was an amplifier that had less cost and more sound.

Today the source is more likely to be a computer or a smart phone than a turntable, but the ability to choose speakers that perfectly suit your taste is still a compelling argument for upgrading to a NAD amplifier. The D 3020 stars with the original NAD concept and takes it straight to the 21st century using the latest high speed digital technology.

Power output may sound small at 30 watts per channel, but like all NAD amplifiers this can be very misleading as a properly designed 30W amplifier can often sound superior to a 100W amplifier from a lesser brand. More important, the D 3020 can drive real loudspeakers to satisfying levels without adding noise or distortion. It’s highly efficient design wastes less energy resulting in cool running and longer life. Standby power consumption is <0.5W.

Supplied with an IR Remote Control for convenience, the D 3020 is at home on a desk top, a book shelf or cabinet. But it deserves to sit on a pedestal for its incredible performance and affordable price! 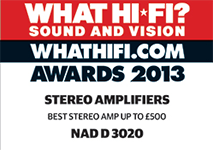 The NAD D 3020 remains a fantastic piece of hi-fi kit. The compact design and breadth of connections aside, it’s the punchy, exciting, nuanced performance that truly engages us.

Best stereo amplifier up to £500, Awards 2013. A potential game changer. We hope other manufacturers take a brave-pill and produce amplifiers as innovative as this.